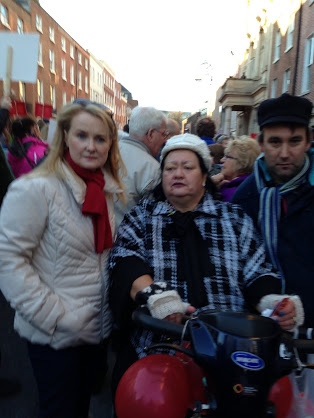 This week Minister Jan O’Sullivan was on the air-waves brazenly defending the Governments latest attack on the sick and elderly by saying she is increasing funding for grants to help the elderly and disabled. This is simply not the case. In Dublin funding for these grants has been cut by 33% over the past year. In 2013 Dublin City Council had a budget of €8.8million in 2014 we are facing a cut of €3.2million leaving only €5.6million.  The Ministers latest decision to change the qualifying criteria now means that not only will there be less money for these grants it will be much more difficult for those who need the funding to access it.   I have consistently campaigned for more funding for these grants because they are really important for elderly and sick people. They can mean the difference between being stuck in hospital or a nursing home or coming home. They allow many elderly people to continue to live independently and with dignity in their own homes. Last summer Dublin City Council had to close the scheme and stop accepting grants because it had ran out of funding. Going into 2014 Dublin City Council has a massive backlog of applications, new applications being made every day and less funding from the Government to meet demand.
The Governments attempt to try to disguise the level of demand by amending the qualification criteria is cynical. The fact that the minister is defending her changes to the scheme and at the same time pretending that there is increased funding is unacceptable. The minister has either been mis-informed or is deliberately misleading people. I would call on the Minister to examine in greater detail funding for these important grants and make available adequate funding to meet demand.  Mary