This problem was caused by the disastrous decision of the majority Labour and Fine Gael Councillors to privatise bin collections in Dublin City in 2012. The Fianna Fail group on Dublin City Council strenuously opposed the proposal to privatise the bin service. 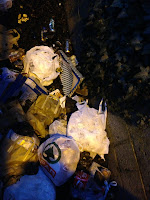 The decision by Labour and Fine Gael Councillors to privatise the bin service was always going to end in disaster because there is no regulator for Waste Collections, the Government’s has failed to introduce the national bin waiver scheme they promised, the legislative changes that are needed to bring effective prosecutions are not in place and there is no evidence of any real savings. Since privatising the bin service Dublin City Council spent more than €20million in 2012 to collect rubbish, has written-off more than €2million in bad debts and has bad debts in excess of €9m.

Homeowners and businesses in Dublin Central are having to pay the price for this major mistake. It is unacceptable to the vast majority of residents in Dublin Central that the same Labour and Fine Gael Councillors who made this bad decision are now asking us to pay a property tax and water charges for less services but more Councillors. At today’s meeting I objected to the recent proposal, backed by Central Area Labour and Fine Gael Councillors, that Dublin City Council stops cleaning-up the illegally dumped rubbish. To do this would be wrong. It would make a bad situation worse. It would penalise responsible residents who do dispose of their rubbish properly. It will send the wrong message about Dublin Central and damage the local community and businesses.

I have called on Dublin City Council to introduce a low cost weekly community collection that will allow people avail of a low cost, pay-as you go, group collection and to extend the opening hours for bring centres in the Central Area.

The Area Manager agreed to consider the views of the Councillors and to bring a report to the next meeting of the Central Area Committee in May 2013.  In the meantime please report any illegal dumping to 1800 248 348.  Thanks.  Mary