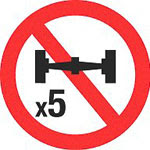 When the 5+axel HGV ban was being introduced in Dublin City in 2007 I succeeded in getting the Navan Road, Cabra, Phibsborough, Drumcondra and East Wall included in the cordon or exclusion zone.  Now Dublin City Council is considering extending the current operating hours of the HGV 5+ axle Cordon in Dublin City, and are asking the public for their views on the proposal .

Currently the ban operates from 07.00hrs to 19.00hrs, while the proposed changes would see the Cordon extending from either 06.00hrs or 07.00hrs to 12 midnight.

Detailed information on the HGV Management Strategy, together with a copy of the report can be viewed here.   Submissions can be made to Dublin City Council and should be emailed to traffic@dublincity.ie before 5.30pm on Friday, 7th December 2012. Mary