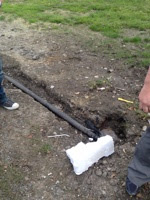 Following the flooding of homes on Dingle and Carnlough Road and Drumcliff Drive in 2011 I worked with residents and Dublin City Council to improve drainage and reduce the risk of flooding in the area. As part of this Dublin City Council undertook improvement works to the road drainage system in the area and built two swales on the greens on Drumcliff and Killala road to take overflow water.

Since the swale on killala Road was constructed last summer I have raised a number of issues with Dublin City Council regarding the swale which they have attempted to rectify. Unfortunately the heavy rain in July this year proved that the swale is still not functioning properly and I have again brought this to the attention of the head of drainage at Dublin City Council.

I highlighted the many problems with the swale including that large volumes of water have remained within the swale for a number of days after normal rainfall, that the base of the swale has remained water logged for several months now and is totally unsuitable for children to play in. 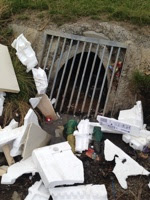 have given me a commitment that structural work will be undertaken to fix the swale properly.

I will continue to work to ensure that Dublin City Council fixes the swale properly and the residents of Killala Road can enjoy the green as they have for generations and at the same time help to reduce the risk of flooding for other homeowners in Cabra. Mary