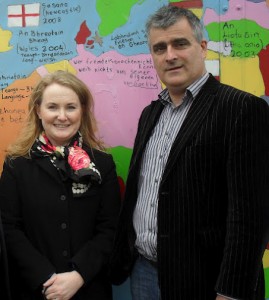 As a long time supporter of the campaign for a proper school for Gaelscoil Bharra I was contacted over the weekend by the Headmaster and concerned parents who are shocked and bitterly disappointed by the Departments surprise decision to put the building project “on-hold”. On Friday last the Department of Education sent a shocking email to the Headmaster stating the project which should have commenced last year has now been put “on hold” pending a budget review.  The children, teachers, parents and friends of Gaelscoil Bharra, are very concerned, disappointed and angry over this unexpected decision by the Department of Education to put funding for the new school building “on-hold”.  The school has operated for years out of Portacabins, was promised four years ago a purpose built school building and had expected contractors to begin building next week.   What to the department is just a project status update is to the school and local community a major body blow.  The news is a major set-back for the more than 200 current pupils, the school teachers and the local community that were promised four years ago funding for a new purpose built school. The Minister needs to stop this bureaucratic madness and immediately release the funds so construction can commence.   The pupils, teachers and wider community want to know that a new school will be built and they deserve to know when ?  The Minister for Education must explain why at this late stage the project is being subjected to a budget review and indefinite delay.  The Minister must explain how long is the review and delay expected to take ? What is the purpose of the review ?  Why was it not conducted prior to now?  What has prompted the review?   Please show support for the pupils, teachers and friends of Gaelscoil Bharra by emailing the Minister for Education and ask her to release funds for the project today.