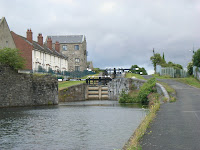 Since I was first elected in 2004 I have consistently campaigned for an upgrade of the Royal Canal Path from Ashtown to the IFSC. Over recent years pedestrians and cyclists have been able to enjoy the upgraded path from Cross Guns Bridge to Binns Bridge and Spencer Dock. At the July ‘12 Central Area Committee I received a progress report that indicates that “Dublin City Council has appointed Consultants to identify feasible options for the provision of cycle tracks along the Royal Canal, from Sheriff Street to Phibsborough Road. It is anticipated that the option selection process will be completed in October 2012. A Feasibility Report has already been completed for the section from Phibsborough Road to Ashtown. Funding for the projects has been provided by the National Transport Authority. It is anticipated that the design process for these three sections will commence in 2013”. Although progress is slower than I would like, it is at least going in the right direction. Mary