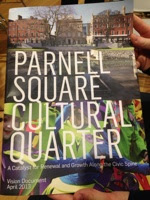 Dublin City Council, The OPW and Kennedy Wilson today announced a €2.5m investment in a new City Library and a Vision Document for a new Cultural Quarter in Dublin City.

I welcome the announcement of investment on Parnell Square to build a new City Library in the former Colaiste Mhuire buildings and the commitment from Kennedy Wilson to lead the fundraising of €60m to build the library in conjunction with Dublin City Council. It is particularly encouraging that there is a commitment from the private investors to hand-over the new Library to Dublin City Council to run as a free public facility once completed.

This is a great boost not just for the North inner city but for the City as a whole and will greatly contribute to the creation of a new cultural quarter in Dublin city. The Minister should show at least the same commitment, as private investors have,  to a new City Cultural Quarter by refusing permission for the demolition of the National Monument on Moore Street. The Minister should accept the unanimous recommendations of the cross-party Dublin City Council Committee to withhold Ministerial consent for the demolition of the National Monument and take immediate action to ensure the Moore Street National Monument is preserved and developed as a 1916 commemorative centre.

It does not take a lot of imagination to see the opportunity for a unique Dublin cultural quarter with the GPO, O’Connell Street, Moore Street National Monument, Parnell Square, the Rotunda, the Gate, the Hugh Lane, the Writers Museum and by 2017 a new City Library. The Minister and the Government have an opportunity to make this vision a reality by withholding consent for the demolition of the National Monument and instead asserting the unique historic, cultural, national and international significance of the area.

I urge the Minister to do the right thing and to refuse consent for demolition of the National Monument on Moore Street and guarantee a world-class cultural quarter for Dublin City for future generations. Mary