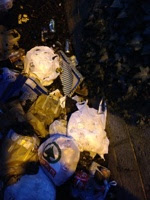 This week Dublin City Councillors agreed to spend an extra €1.4million on waste management services to try to clean up the mess that they created by privatising the bin service.

More than a year ago, myself and some other Councillors strenuously opposed the secret deal done by the City Manager, with the support of Labour and Fine Geal Councillors, to privatise bin collections in the city.

This flawed decision has really hurt the city and left the city in a mess. In some parts of the city illegal dumping has escalated to the point of being out of control. Street cleaning is insufficient and fails to address the problem and keep the city streets clean.

Homeowners are being asked to pay an unfair property tax for local services yet homeowners in Dublin have been left with no choice, poor service and dirty streets in the city.

Last month I proposed a motion calling on Dublin City Council Waste Management Department to do it’s job and instead of removing public bins from the streets of Dublin to empty and service them more regularly. Their reply was that they only remove bins that are being abused. By abused they mean over used. This policy highlights Dublin City Council’s poor response to the issue of waste in the city. Essentially Dublin City Council is saying it puts public bins on streets expecting them not to be used.

The latest proposal from Dublin City Council, made this week at the Central Area Committee, is to leave dumped rubbish on the streets weeks at a time. DCC presented this as a radical proposal that was again supported by Labour and Fine Geal Councillors. It is radically wrong.

Already people visiting the city are confronted with an out of control litter crises on the streets. People from around the globe are exposed to the dirt and filth via social media, blogs and Facebook. This botched decision to privatise bin collections in Dublin City is doing untold damage to the city economy and local communities.

Clearly the City Council has got its waste management strategy all wrong. The City Manager leaves office today and to be fair he was only implementing Government policy. The Minister and Government parties must take responsibility for the damage their decision is doing to the city and the Minister should instruct the City Council to scrap their proposal to leave rubbish on the streets and instead clean-up the streets of Dublin.  Mary