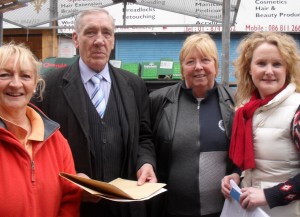 As a former member of the Dublin City Council Moore Street Advisory Committee Mary welcomes the establishment of Dublin City Councils 1916 community commemoration fund.  Dublin City Council is currently accepting applications from local community groups for funding to support commemorations of the Easter 1916 Rising.  The deadline for applications is 29th May 2015 and you can download an application form here.  Fianna Fáil, as a national movement, was inspired by the Leaders of the Rising and founded on the ideals of the Proclamation. Many of the founding members of Fianna Fail played a central role in the fighting of Easter Week;  Fianna Fails first leader, Eamon de Valera, and the most successful Irish political leader of the 20th century, was the most senior leader of the rebellion to survive.  Constance Markiewicz, a leader of the Citizens’ Army chaired the founding meeting of Fianna Fáil.  There were many other men, women and children who fought in 1916.  Mary’s husband’s grandfather Sean P Cody 1st Battalion fought in and around the Four Courts and Church Street in Dublin Central.  As  it’s contribution to the centenary commemorations Fianna Fail is engaging members to organise member driven public events across the country  to commemorate the centenary of 1916.  More details can be found here.