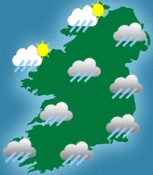 MET Eireann issued a rain advisory (not a severe weather alert) at 11.14 today for the period from midnight on Wednesday 25th April 2012 to

This has been assessed by the City Council’s Emergency Management Team and following discussions with MET Eireann’s Forecast Division the latest forecasts for Dublin as forecast by MET Eireann is for 12-15mm of rain over this period and other international forecasts are suggesting 15-20mm of rain in this period.

Tides on Wednesday and Thursday should reach levels of 1.6m Malin, 1.5m, 1.3m and 1.0m respectively, which are well below monitoring level of 2.3m Malin. 30-60km/hr ESE, ENE, NE and NNE winds are also forecast.

Areas at potential risk are:

General guidance on how to reduce flood risk is contained in guidance booklets produced by Office of Public Works is available on www.opw.ie and is also on the City Council’s website. www.dublincity.ie