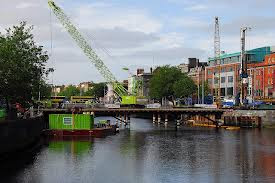 As the construction progresses there is increasing interest in the naming of the new bridge over the Liffey.  Dublin City Council received 85 official nominations along with almost 10,000 supporting submissions, including e-mails, direct correspondence and petitions.  At the meeting of Dublin City Council’s Commemorative Naming Committee yesterday, the 85 nominations were shortlisted to 17. (see list below) The shortlisted names will be reviewed at the next meeting of the Committee on 12th June, 2013.
Shortlisted names are ;
Abbey Theatre Bridge

﻿
The City Council is aiming to have a decision on the naming in autumn 2013 and the new bridge is scheduled to be completed in late 2013.  Mary