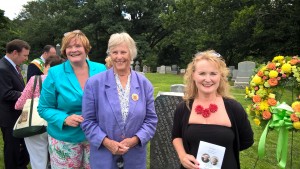 It was an honour to join the Grand-daughters and family of Jeremiah and Mary Jane  O’Donovan Rossa at the memorial mass in St Peters Church on Staten Island, New York on 29th of June 2015.  The mass was held to mark the 100th anniversary of the death of Ireland’s patriot son, Jeremiah O’Donovan Rossa.  It was celebrated by Monsignors Dorney and Finn and Fr. Martine.  Bishop John O’Hara of Staten Island was unable to attend but sent his blessings. The mass and wreath laying at the family plot on Staten Island was organised by the Staten Island branches of Ladies Ancient Order of Hibernians and the Ancient Order of Hibernians.