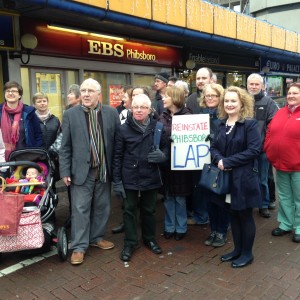 For ten years as a City Councillor I worked with residents and officials to protect and develop Phibsborough as a prime urban village.  Like many others I was dismayed to recently learn that the Phibsborough Local Area Plan (LAP) that we had worked on for many years was recently rejected by Councillors.

The Phibsborough Local Area Plan (LAP) is too important to be abandoned and Dublin City Councillors need to take action to save the plan.  The vote taken at the City Council meeting on 7 December should be deemed invalid and another vote should be held to reverse their disastrous decision at the special meeting of the City Council this evening.  There were numerous aspects of how the vote was taken that could have it considered invalid:

The rejection of the Phibsborough Local Area Plan at the meeting on 7 December  was a major set-back for the local area but also for the city.  It was a body blow to the local community, to the many residents and voluntary groups who worked so hard for many years and it also a huge waste of public funds. There is major upset in the area that this has happened.  The LAP is one of two items on the agenda at a special meeting of Dublin City Council this evening Thursday 17 December. I am calling on all Councillors to attend this meeting and to support my call for a proper vote to be taken on the issue.  Phibsborough both needs and deserves a proper statutory Local Area Plan. We should not be short changed. Phibsborough should not be treated as a second class part of the city instead it deserves to be protected and developed as a prime urban village.