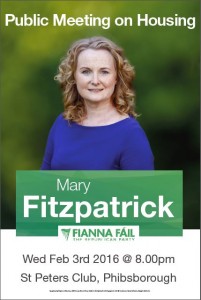 There has been a 330% increase on social housing waiting lists in Dublin City under this Government which at first denied and continues to totally fail to address the chronic housing shortage. Labour and Fine Gael have forced 100s and 1,000s of men, women and children into homelessness.  They stubbornly refuse to consider increasing rent allowance for families at risk of losing their homes.  Their refusal comes at a time when the latest report from the Simon Community shows that 95% of properties available to rent are priced beyond the reach of people depending on state rent supports for their housing. Fine Gael and Labour have completely failed to take charge of the housing issue and because of their indifference and failure to adopt any concrete measures this problem is now a national emergency. The housing issue affects people of all ages and backgrounds.  It spans across a number of sectors – home ownership, rental, social housing and emergency accommodation.  Without a place to call home it is impossible to access education, work or training.  Without a permanent residential community no constituency can be stable.  The serious lack of supply is a direct result of Fine Gael’s lack of investment in housing.  Between 2007-2010, Fianna Fáil built 1,659 new social housing units in Dublin City local authority, at a time when there were 4,885 households on the social housing waiting list. In stark contrast, Fine Gael and Labour all but halted the social housing programme, building a mere 227 units in Dublin City between 2011 and the end of 2014. This has led to a surge of people on the social housing list with over 21,000 households now in need of social housing, or close to 50,000 individuals according to the most recent figures. The dramatic shortage of supply is forcing up rents in the private sector. This Government has spent the past year scrambling to come up with a plan but their rehashed ideas are simply not delivering.  Fianna Fáil has a credible, multi-faceted approach to address this crisis. We will increase rent supplement and build 45,000 social houses.  We will also introduce a help-to-buy scheme for new home owners.  Next Weds 3rd February 2016 @ 8pm I am holding a public meeting to address this important issue and to share our ideas on how we will address this issue if elected to the next Dáil.