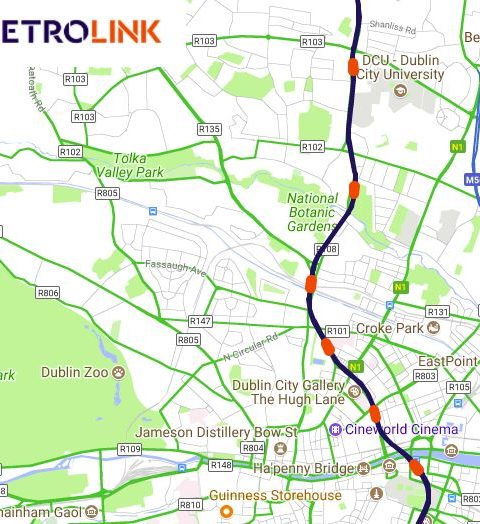 TII, Transport Infrastructure Ireland, recently announced a route on which it intends to construct a 26km North – South urban railway to run between Swords and Sandyford.

In Dublin Central the proposed Metrolink route includes stations at O’Connell Street, The Mater Hospital, Cross Guns Bridge (they call this stop Glasnevin on their plans, but it is proposed for Des Kelly site at Cross guns) and on Mobhi road at Na Fianna, Homefarm FC, Scoil Catríona and Scoil Mobhi.   More details HERE.

Additionally, TII are proposing to use the Mobhi road site as a base for the tunnel boring which will mean that for the full duration of the project this site will be out of use for the community.

TII intend to commence work in 2021 and works will take a minimum of six years.  I have been in contact with the clubs, schools and residents and offered my support and the full support of the Fianna Fáil party.

I have asked the Minister for Transport to fund independent advice for residents to support their engagement in the planning process.

TII spent eighteen months and €80m developing this plan and they are now inviting feedback from the public on their proposed route.  They are currently holding public information sessions on the following dates at the following locations for Dublin Central:

We have all seen plans like this before and a Railway Order with full cost-benefit analyses and planning application have yet to be prepared or approved.   However, I do encourage anyone living on or with an interest in any property on or near the proposed route to go along to the public information sessions.

In the meantime, I have asked Dublin Bus and the Minister for Transport to address the inadequate bus capacity at peak times by rostering more buses at peak hours so that commuters are not left standing as packed buses pass us by.